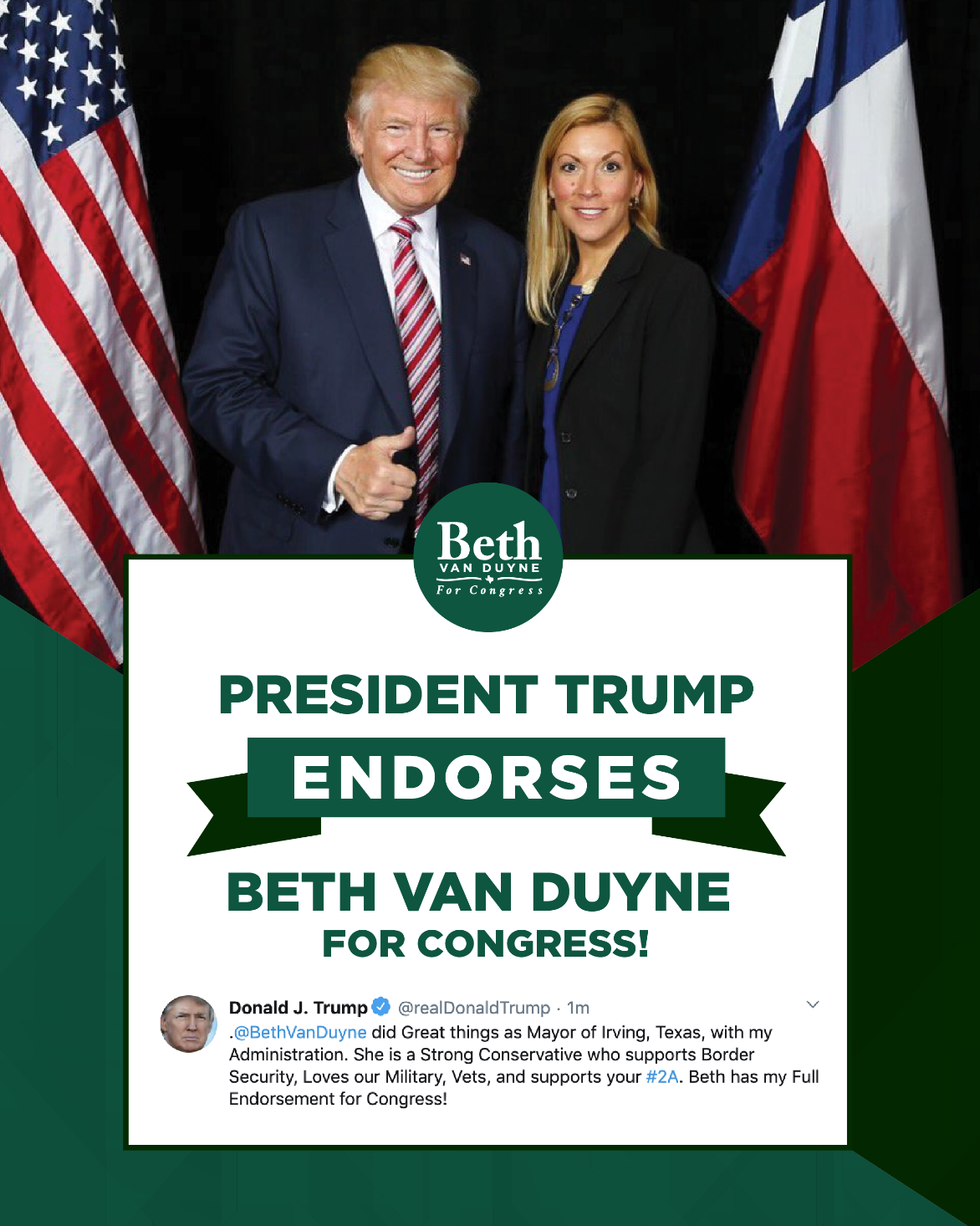 “Texas energy development powers our nation and helps our allies around the world. We need to elect courageous leaders like Beth Van Duyne to ensure America expands energy development so we can achieve energy independence and preserve millions of well-paying middle-class jobs for our hard-working families.”

“Beth Van Duyne is an outstanding candidate who I am proud to endorse and enthusiastically support. As Mayor, Beth has a proven record of conservative accomplishment including job growth for North Texas families, lowering tax rates, and leading Irving to be the 5th safest city in our country.”

“To take back the House of Representatives, and stop the rise of socialism in Congress, We need to elect proven leaders like Beth Van Duyne. I believe in Beth. She has my wholehearted endorsement, and I know she will be a tremendous voice for limiting the power of government and expanding opportunities for hard-working Texas families”

“Beth Van Duyne is truly a fantastic candidate for the 24th District. She’s a proven leader who has already delivered conservative reforms for North Texans: lower taxes, keeping our communities safe, and stopping government corruption. I’m proud to endorse such a well- qualified candidate and hope you will join me to help elect her in this very important election.”

“Value In Electing Women (VIEW PAC) is proud to endorse Beth Van Duyne for Congress in the 24th District of Texas. Beth’s record of delivering pro-growth and fiscally responsible reforms to expand job opportunities in North Texas is exactly the effective leadership we need in Washington. As the nation’s oldest organization designed to support Republican women running for federal office, VIEW PAC recognizes Beth Van Duyne is a rising star and we encourage professional women from around the country to support her in this critical campaign.”

“To stop the rise of socialism by radical Democrats in Congress, we need thoughtful, experienced, conservative candidates like Beth Van Duyne to run and win. I am thrilled to endorse Beth, and our campaign has given her the maximum donation possible. I also urge everyone to wholeheartedly support her campaign. Texas, and our nation, will be stronger with Beth Van Duyne serving the great folks of the 24th District.”

“Beth Van Duyne was a tremendous Mayor for the City of Irving. Under Beth’s leadership, they cut tax rates, expanded job growth, and Irving was recognized as one of the safest cities in the nation. I urge everyone in the 24th Congressional District to join me in helping elect Beth Van Duyne as our Congresswoman.”

“North Texas needs Beth Van Duyne working for us in Washington. She’s already proven she can stop government corruption and “good ole boy” politics that wastes millions of taxpayer dollars. I know Beth won’t back down when it comes to protecting our liberties, exposing corruption, and making the government work for the people, instead of against us.”

“I am happy to endorse and ask you to support Beth Van Duyne for the 24th Congressional District. I know she will be an ally in the fight to stop government corruption, double standards in the application of law, and ensuring the rights of all our citizens are preserved and protected.”

“I’m proud to endorse Beth Van Duyne for the 24th Congressional District because she has always been a strong supporter of the men and women in law enforcement. Even during difficult circumstances, Beth stayed by our side, and encouraged the community to do so as well. Beth believes in the rule of law and her work helped make Irving one of the safest cities in America.”

“Beth Van Duyne understands that enforcing our laws protects the innocent and delivers a measure of justice for the victims. I’m proud to stand with Beth to be our next Congresswoman for the 24th District because of her courage, tenacity, and dedication to protect our communities and all North Texans.”

Other Endorsement of Note: